Floods result from the overflow of water which submerges the surrounding land. They are frequent on the coast of Côte d'Ivoire during the rainy season and have more or less serious consequences on the populations, property and the environment. The study site is the San Pedro river basin. It is a coastal catchment area characterized by an average annual rainfall of up to 2000 mm and subject to recurrent flooding. The objective of this study is to assess the risk of flooding during the great rainy season of 2017. The study aims to study flood hazard, assess vulnerability and map flood risk areas. The methodological approach is based on the use of C-band (5.6 cm) radar remote sensing data acquired by the Sentinel-1 sensor at 12-day intervals. These data are in GRD (Ground Range Detected) level 1 format and were used to calculate the radar backscatter coefficient. The results obtained allowed to map the extent of the flooded areas and showed that more than 6,000 ha of land is flooded for more than 3 days. Sentinel-1 has enormous potential to identify flooding risky areas and to continuously monitor them.

Aim: Since decades, a major part of south-western coastal region of Bangladesh is being affected by water logging – a problem related to climate change along with some manmade activities. Therefore, the study was conducted to assess the causes and consequences of this problem and highlights the responses of affected people to attract policy planners’ intention for taking proper intervention.

Place and Duration of Study: The study was conducted in the Laboratory of Plant Ecology, Department of Crop Botany, Bangladesh Agricultural University, Mymensingh, Bangladesh.

Methodology: Qualitative and quantitative techniques have been applied to collect and analyze both the primary and secondary sources of data from various waterlogged areas of south west Bangladesh.

Results: There is no single or a few factors are responsible for creating water-logging problem rather it is a combination of several factors and their cumulative effects over time. It is revealed from the analysis of primary and secondary sources of information that death of Mathavanga River in the 20th century, execution of Coastal Embankment Project since 1960’s, withdrawing water flow to the Padma River through operating the Farakka barrage after independent of Bangladesh, improper management of rivers, faulty land-use by influential people in the areas, monsoon downpour etc are major causes of the problem. The silted up river systems in area could not drain monsoon rain that occurred even for a couple of days. The consequences brought to inundate hundred thousand hectares of cultivable land unsuitable for crop production. More than one million people are directly affected in the areas and the number is gradually increasing over the years. Water stagnancy around the settlement areas remains 6 to 9 months in a year and many places became permanently waterlogged. The affected people have no other way out but to live with water. The congested water is polluted with salinity, chemical effluents with heavy metals, household debris’s and related other pollutants. Source of safe drinking water is destroyed. Therefore incidences of waterborne and skin diseases are increased. People are living with greatest inhumanity as food, shelter, sanitation, communications, educations and other prime needs are tremendously challenged. Many people lost their occupations and became destitute, some altered their livelihood to much lower grades, and many of them are forced to migrate to city areas. The marooned people demanded to the authority to declare their places as an affected area and sought the government intervention to bring an end to the crisis through operating the Tidal River Management plan and excavating or re-excavating of associated rivers, channels and rivulets.

Conclusion: The authority need to pay keen attention to the issue and should take proper initiative to mitigate the water-logging problem permanently to save people living in the south western coastal region of Bangladesh.

Until the beginning of the 21st century concerns related to the management of protected areas have been reduced to the voluntary initiatives of nature lovers, rarely materializing in specific conservation measures carried out by the authorities or administrators of those areas. As the concern for the management of protected areas is relatively new in Romania and the information related to this subject is relatively scarce, especially those regarding marine ecosystems, we considered necessary this study on the management of marine protected areas in relation to oil pollution. Marine protected areas, in particular, delimited as areas where the main purpose is the protection of nature and cultural values, are important for all segments of society. They have great potential to become models of harmonious society development, promoting more than other protected areas the sustainable resource management. At the same time, the management measures promoted, sometimes imposed, can affect the communities inside or in the immediate vicinity of the areas, and can significantly influence the development of the economy. Recently (as a reference 1970-2020), the pollution of the marine environment with petroleum products has gained dramatic accents. The maritime transport of oil, the exploration and exploitation of marine deposits, their processing in refineries located in the vicinity of the coastal area, to which are added other anthropogenic activities, have generated and still generate a number of risk factors, which involve numerous pollution incidents. Navigation accidents of large oil tanks or incidents at offshore drilling rigs caused, in the same period, major environmental disasters, with the most severe consequences. Marine ecosystems in polluted regions have thus suffered major losses and disturbances, which have been felt for a long time. Through this paper we aim to review some aspects of oil pipeline pollution of the Planetary Ocean, respectively the associated pollution in the Black Sea ecosystem. Following the analyzes carried out on the basis of the data from the consulted literature, as well as following other observations, we came to the conclusion that the protected areas associated with the Black Sea, as well as the marine ecosystem itself, are far from being affected by such accidents.

Almost a third of the Earth's surface is occupied by vast stretches of stone and sand, having a torrid climate or, on the contrary, extremely frigid. As such, the regions considered to fall into the category of deserts, which can be hot and arid, semi-arid, coastal, or cold, are of interest for the present study. In the same context, at the level of the Maramure? County surface, a major place is occupied by the areas that have served mining activities, and which, at first glance, have similarities with the specific landscapes of deserts. Starting from the aforementioned, through the present work, we intend to underline, in the form of a comparative study, the main common elements that exist between the naturally formed (globally) and anthropic (locally) deserts, for those the latter considering the areas of Maramures County, affected by the specific mining pollution.

Identification of Critical Diffuse Pollution Sources in an Ungauged Catchment by Using the Swat Model- A Case Study of Kolleru Lake, East Coast of India

Freshwater ecosystems are facing severe threats from human activities. As a consequence of this, they can get disturbed. In developing countries, like India, freshwater lakes are endangered primarily by agricultural activities, which often accelerate erosion and the runoff. The massive application of pesticides and chemical fertilizers to agricultural lands is one of the reasons for eutrophication in Kolleru Lake. The different natural and anthropogenic influences increase the highly complex ecosystem of the lake. Therefore, the objectives of this study are to ascertain the priority control areas, aiming at socio-economic development for the protection of the lake water quality by applying the Best Management Practices (BMPs).

For this purpose, the Soil and Water Assessment Tool (SWAT) was used to identify the critical areas of the lake's catchment in terms of pollution from agricultural runoff into the tributaries of the Kolleru Lake and the lake itself. The results demonstrated that the diffuse pollution load in the western and downstream watersheds the highest and that agricultural land was the primary pollutant source besides the accumulation of nutrients in the downstream areas. The differences in the sub-basin loads were observed in the catchment mainly depends on the topographic features, soil properties, land use, vegetation, and drainage patterns. From where the major outlet sub-basin has the highest accumulation of nitrate-nitrogen (NO3_N), and total phosphorus (TP) emissions were quantified. The temporal distribution of runoff and diffuse sources were estimated from 2008 – 2014. The runoff mainly governed diffuse pollution was found to be a significant contributing factor to the lake. Further, suggestions were provided for the implementation of agricultural management practices to minimize pollution levels. 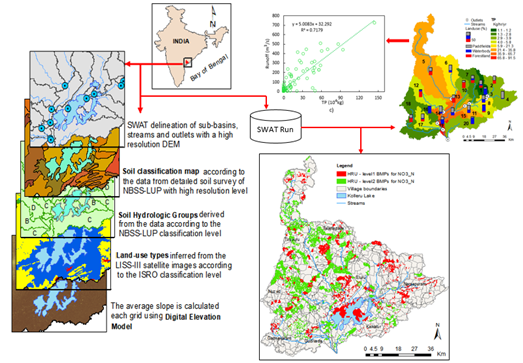 (Own Source: Diagrammatic representation showing the interrelationship of the SWAT run model)